After a tiring month-long campaign, Blood Shed hit and exceeded its Kickstarter target on 27th March! James Moran and I are overjoyed. When we embarked on this crazy dream of a man-eating shed, we had no idea that we’d end up with pledges hitting 114% from 166 backers.

We initially aimed for £10,000, so this is a real triumph for us. Yes, Kickstarter takes a share of this for using the platform, and we have to cover the rewards and postage and packing from this amount, but this is still a good sum of money to make a really ambitious short film with. Nevertheless, purse strings will be tight and we want to make Blood Shed the most amazing film that we can, so we’re working round the clock on pre-production and will be squeezing the most from every single penny.

James is directing, I’m producing and we wrote the piece together – our first official writing collaboration – so this is rather a special project for us. It’s come a long way since my initial light bulb moment when I was cooking last November and improvising trailer voice overs for imaginary films! This happens to be how a lot of ideas come to me…

The support we’ve had from pledgers, press, bloggers, industry bods and film enthusiasts has been amazing, as has the support from family and friends. Running a crowdfunding campaign is tough – nothing prepares you for the sheer blood, sweat and tears that goes into it, and the round the clock management is all-consuming. You find yourself working through your sleep, skipping meals, unable to answer personal calls or even go out sometimes. Also, no amount of research into peak times, best times to launch and end, best times to make announcements, types of perks to offer and pricing, etc. really makes much of a difference – there’s a lot of luck and a lot of random peaks and troughs along the way. All the support we had really kept us going and motivated us to keep being creative and interacting in different ways across different platforms. You all helped us to keep the faith!

We shoot the film at the end of April, so just a few weeks away, and we’re hoping to have the film completed in June. The film stars the amazing Sally Phillips and Shaun Dooley, and we’ve an impressive team on board. You can read more about the cast and crew at the official Blood Shed website.

We still have a limited number of perks left, such as signed scripts, limited edition merchandise packs, digital downloads, writing-related perks, and props from the film. These perks are available for purchase from the Blood Shed website until 1st May 2017 only.

I’ll keep posting updates, but more information will be added to the film’s website over time. For now Shedites, thank you. And I’m off for a quick sleep. 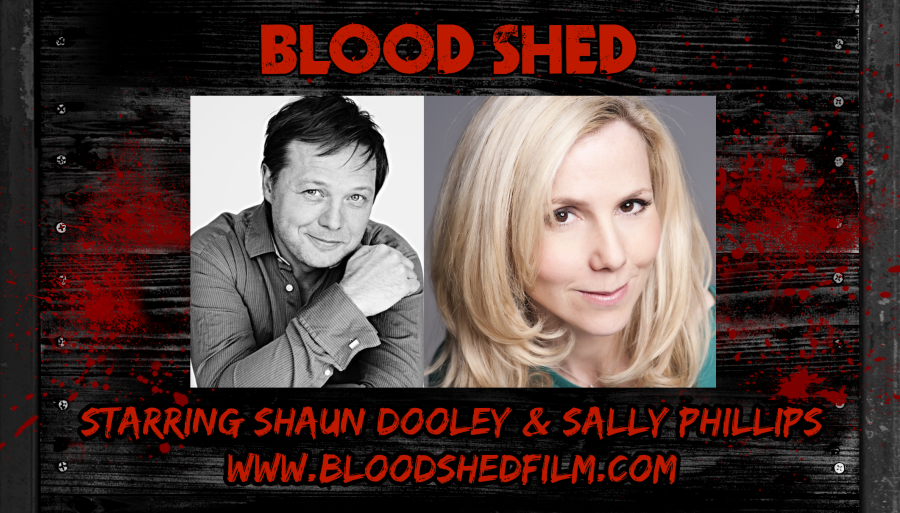