Indulge in a bit of aural pleasure with the latest episode of the brilliant award-winning podcast, The Evolution of Horror!

I joined Mike Muncer as his guest to delve into cult classic The Blob from 1958 – starring Steve McQueen in his first notable movie role, and its far superior 80s remake, thanks to the golden horror combination of Frank Darabont and Chuck Russell. There’s lots to love about both these lovely, gloopy alien movies.

Prepare for a potentially controversial statement about another horror classic! Gasp!

First, I chatted with captivating BAFTA-nominated actress, Niamh Algar, about British psychological horror Censor for the cover feature. I’ve been a fan of Niamh’s for a while now since her roles in The Bisexual and Pure, so it was great getting under the skin of her character in this movie – a stylish, smokey piece set against the backdrop of the 1980s video nasty era by debut featuremaker, Prano Bailey-Bond. The UK cinema release date is now 20th August.

Second, I had the honour of interviewing director Ate de Jong about a film I hold dear to my heart, Drop Dead Fred. A personal favourite from my childhood, for reasons I discuss in the piece, Ate and I spoke at length about the serious undertones of this gross-out comedy that was unfairly dismissed in the early nineties, but thirty years later has finally found its audience and cult status. Starring one of my all-time heroes, Rik Mayall, I got the skinny on all the folklore around Fred. I did meet Rik once in my twenties, but that’s a whole other story!

Massive gratitude to the editor, Simon Brew, for once again giving me the pages to write about films I adore and speak to people I admire.

The little fierce diva Connie has a new lease of life! She is back and has high-kicked her way onto Shorts TV’s subscription channel on Amazon Prime. You can watch the feisty foul-mouthed showgirl as part of a free seven-day trial now.

My feature film, EVACUEES, currently in development with Kato Pictures, has made the press!

Big thanks to Starburst firstly for their continued support of my work. Full article here.

And we’re mentioned in Penny Dreadful’s fabulous column in this month’s SFX magazine (April 2021 issue). What a legend. We’re referenced alongside some awesome talent there – extremely flattering! Massively appreciated. Lauren Parker and I are chuffed.

Conceived in late 2018, Evacuees started as a pitch selected as one of eight feature projects in Arrow Video FrightFest’s New Blood 2018 contest to receive mentoring from BAFTA-nominated producer Jack Tarling (God’s Own Country), horror icon Barbara Crampton, director/producer Jenn Wexler, and Queensbury Pictures’ Giles Edwards. Since then, the script has grown through its infancy to become a Stage32 and Screencraft semi-finalist.

Set in 1943, it tells the story of a Yorkshire town that plays host to a group of child evacuees from war-torn London. Childless outcast Elizabeth grows close to them, but faces a dilemma when she discovers the truth of their sinister intentions.

Lauren Parker is a member of the BFI Network x BAFTA crew as a producer, where we first connected, and was awarded one of only twelve places on their mentoring scheme. Lauren is currently mentored by Camille Gatin (The Girl With All The Gifts). She was also selected for the Edinburgh International Film Festival Talent Lab in 2018.

Lauren has produced successful shorts including the award-winning Night Owls and the Creative England/BFI NETWORK funded Wash Club. Wash Club received an online premiere with Short of the Week and a Vimeo Staff Pick.

Lauren’s latest short Majority was funded by the BFI NETWORK and has screened at Krakow Film Festival, Palm Springs Shortfest and BFI London Film Festival. Her next short Lord of the Free Range is due to shoot in 2021 with the support of the BFI NETWORK. Her films have played festivals around the world including Frightfest, Sitges, Aesthetica, London Short Film Festival, This is England, Galway Film Fleadh and many more.

She started her career in television as a production assistant with Endemol and has since worked in TV production with CBBC, BSLBT and Wellington Films. She recently worked as line producer on the interactive project As Dead As It Gets. Lauren has also worked on a range of feature films, from low budget horror to the BFI funded The Devil Outside.

Lauren has produced countless commercial and corporate videos with clients including Porsche, Boots, Nottingham City Council and NY record label, Bear and Owl. Her music videos have been screened on Vevo and MTV as well as nominated for Best Radar Commission at the Radar Music Video awards.

As a filmmaker, this story allows me to explore themes and concepts around motherhood, fertility, femininity, gender and identity through complex characters that are rarely portrayed on screen.

I’m so happy to join forces with Lauren on Evacuees. Her passion and enthusiasm for the script is palpable, even through lockdown, and I look forward to channelling our energies into raising this project from toddler through to adulthood.

A cool project that I’m involved with is now on sale! I’m a guest writer included in Faux Hidden Gems of the VHS Era – a collection of all the best/worst and bonkers plots from the back covers of 1980s VHS boxes, but for movies that don’t exist! It’s a smashing little book available in an actual print edition and is the brainchild of the magnificent Mike Garley, an EMMY-nominated comic series writer (Collider, Wallace and Gromit, Adventure Time, The Kill Screen).

As a kid, my family rented stacks of VHS tapes every weekend – all the weird and wonderful shock and shlock flicks. They all had glorious cover art that was sometimes better than the movie itself, cracking loglines and enticing synopses. This book pays tribute to the era with a compendium of completely made up movies that could totally have been made and fit in perfectly with the real thing on video shop shelves.

I’ve created a totally made up cult VHS hit for this book, complete with logline, reviews, production gossip and a crazy premise. The book features 52 fantastic creations from the depths of the mind of Mike Garley and other guest writers – it’ll leave you wishing you could actually rent these gems. It’s great escapist fun and only £6.00. Buy it here now.

I’m delighted to have written the cover feature for this month’s Film Stories magazine! I was lucky enough to interview the chameleonic actress Morfydd Clark, who spoke to me about two new films out in October that she stars in – psychological horror, Saint Maud, and the comedy drama, Eternal Beauty. We had a good old natter and chatted about both and so much more.

Speaking to me from New Zealand, where she is currently filming the new Lord of the Rings TV series for Amazon, Morfydd was incredibly insightful, charming and self-effacing. She sets the screen ablaze in both films. I also wrote the Eternal Beauty review in the same issue. Huge thanks to the editor, Simon Brew, for being such a supporter of my writing.

I LOVE a good podcast, especially podcasts about films, so I was chuffed to chat about two great stonkers in two recent podcasts, both of which are now available for your aural pleasure.

First, I chatted to Mike Muncer on the hugely popular Evolution of Horror podcast about Ti West’s 2009 retro occult horror, The House of The Devil. A stunning example of beautiful low-budget independent filmmaking, which wears its influences on its sleeve, Mike and I delved deep into the plot, aesthetic, its legacy and superstar Greta Gerwig’s supporting role, as well as its film nerd status as a fine example of ‘mumblegore.’ This episode is twinned with Mike’s chat with Robb Watts about another witchy release from the same year, the equally brilliant Drag Me To Hell by Sam Raimi. Have a listen here or via Apple Podcasts and other services. It’s recently been Apple Podcast’s number one film history podcast!

Then I had a good old natter with Mark Goddard and Chloe Davies for the Franchise Players podcast about one of the best thrillers that has ever been made – yes, I said thriller rather than horror – Richard Donner’s 1976 classic, The Omen. This is another movie I have such respect for, and Mark, Chloe and I discussed the film in great detail – scene by scene where we could, evaluating the story, performance, score, its set pieces, where its genre lines blur and the influence it’s had on modern horror classics. We spoke for several hours and I could have praised it for another six hours. You can listen here.

If you love a bit of film history, critique and trivia, or just want to get your geek on during your commute, when cooking, in the bath or when trying to sleep, or you’re searching for creative inspiration, both are a good, fun and worthy listen. Enjoy!

And there’s more of me chatting on podcasts to come over the coming months… To be announced soon!

After about sixty film festival screenings internationally, Blood Shed is now finally available to buy on Amazon Prime Video for £2.99 HD or £1.99 SD in the UK and the USA. So a bargain price for a bargain shed! OR, better still, it’s free to watch if you already have Amazon Prime! So go, fly my pretties, fly… Fly over to Amazon Prime and take a peek at our bloody sheddy horror comedy short!

Please watch, rewatch, share. I loved directing the Night of the Living Dead segment with the wonderful Emily Booth – such a funny woman. Huge thanks to her and our other brilliant guest stars. We made this with a huge amount of love, care and attention couldn’t have done this without the fab crew who gave us days and days of their time on this epic labour of love – Kirsty Graham, Joao L C Da Silva, Stu Dye, Taylor Rae Papworth, Grace Sargeant, Rhian Webster, Lauren Webster, Louise Brightman. This is our last ident as we’ll never beat this one!

It was screened before the UK premiere of Come to Daddy at FrightFest on the gigantic iMax screen last night.

and all the FrightFest team x 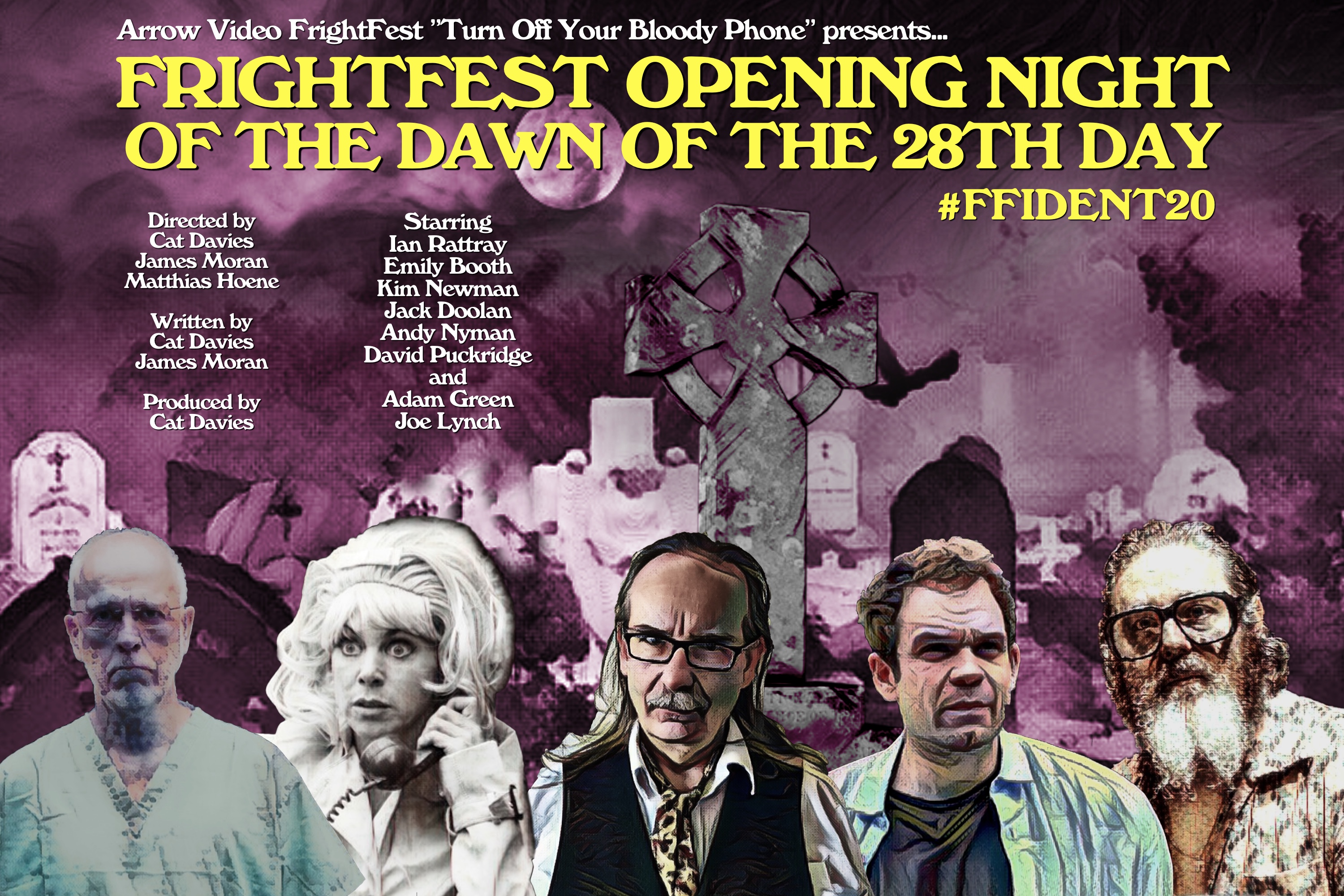